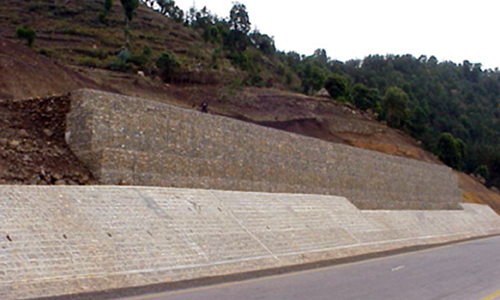 The Kombolcha –Gundewein Road Project is
located in the Amhara Regional State in the northern part of Ethiopia.  The total length of the road is 309 kilometres.  The work in the second contract of the project, which is from Mekane Selam to Gundewein with an approximate length of 139 kilometres, consists of the construction of a new DBST
Standard road.

The Ethiopian Roads Authority has seen a significant increase in landslides as the road network has continued to expand over the last 20 years. The usual impact of these landslides on Ethiopian roads is long-term and progressive slope movement, often triggered by heavy rainfall. Shear surfaces are often shallow, occurring for example in black cotton soils and weathered tuffs. The majority of slope failures affecting the network involve cut slopes or fill slopes where weak horizons are exposed or overlain.

The Consultant was asked to map the existing landslide distribution and then to use this information to carry out an assessment of landslide susceptibility, hazard and risk.  The landslides have been mapped using a combination of aerial photograph and satellite image interpretation backed up by field mapping. The hazard and risk assessment process was used to identify 117 landslide locations of particular note (i.e., high level of risk, significant landslide problem, etc), where more detailed engineering geological and geomorphological mapping was undertaken.  A number of the areas have also been investigated further through detailed ground investigation.

The results from the mapping and ground investigation have been used to carry out slope stability assessments and design of remedial measures including retaining structures, earth reinforcement, rock bolts and anchors, soil nailing and re-profiling for these areas.